Paul Mooney shares his life and his friendship with Richard Pryor 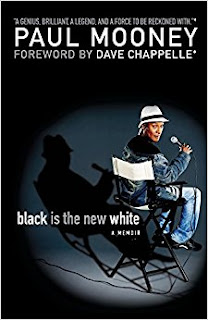 
I love Paul Mooney.  Ever since my wife Elizabeth introduced me to the man’s genius, I have been a devoted fan.  I have heard his comedy records, and have seen his stand-up specials.  My wife and I were lucky enough to catch Paul Mooney live at the Houston Improv about 5 years ago.  It was the best comedy act I have ever seen.  As a fan of transgressive humor, there is no one finer when it comes to dealing with the topic of race in American life than Paul Mooney.  Having absorbed as much of his work as possible I went ahead and dug up his 2009 memoir, Black is the New White.

This memoir is as much the story of Paul’s life as it is the story of his relationship with the comic genius Richard Pryor.  It is the most important relationship in his life, perhaps second only to the love given him by the grandma that raised him, who he called “Mama.”  He credits her with filling him up with so much love that he never needed to seek out the acceptance of anyone else.  This made him immune to the sickness that befalls many entertainers, which is their desire for love and acceptance at any cost, which usually ends up ruining careers.  This is also the reason that Paul Mooney has never sought validation from the Hollywood “community.”  I think this stability is one of the reasons that Richard Pryor and Paul Mooney became so close.

Mr. Mooney knew from the start that the inner core of the genius Pryor was a needy, lonely, and desperate little boy who just wants to be loved.  He sought out that love in drugs, drinking and women.  He routinely would drive himself to near-exhaustion with drug binges, women binges, alcohol binges, etc.  Add this to the already immense career pressure that Richard Pryor experienced once he became a house-hold name, and one can see how the calmness, the wisdom, the blackness, and the humor of Paul Mooney was a tonic for Richard.  Their relationship is a great example of acceptance between friends, even though the knowledge of imminent self-destruction is ever-present.  There was no way to turn his best friend from the path he had chosen.

Paul’s career, while not as stratospheric as Richard’s, has carried him through decades of Hollywood turmoil, racism, and idiocy.  He includes many of his stage jokes in the book, and it is awesome to hear his voice in my head, as if it was speaking directly to me.  He has always supported the comics around him, from giving John Witherspoon, Sandra Bernhardt and Robin Williams their first TV gigs, to opening for Eddie Murphy’s RAW tour, to helping Dave Chappelle craft the funniest comedy show of the last 15 years.  Paul Mooney has never quieted down.  He has never dumbed down his act.  He continues to rail against the stupidity of racism and racist white people.  As he states often in the book, his audience consists of “black people and brave white people.”  That is a funny throwaway line, but it speaks a deep truth.  Only the brave are willing to be ridiculed, understanding the jokes and the truth underneath the jokes.  Bravery is critical to enjoy Paul Mooney’s comedy.  The fearful get up and run away in the middle of Paul’s sets.  He has done this since his start in the comedy clubs in LA.  He knows that if some people walk out, it only reinforces the truths he is describing.

While I wish that there was more about Paul’s personal thoughts and inner monologue in this book, I can understand the inclusion of so much regarding Richard Pryor.  Not only was he Paul’s best friend but he was his hero as well, and no one in Hollywood will give you the unvarnished truth about Richard Pryor like Paul Mooney does.  It is a funny, unforgiving, caustic, and honest book.

(This book can be purchased here:  Black is the New White )
Posted by Rob Instigator