Alfred Bester writes a novel for the ages 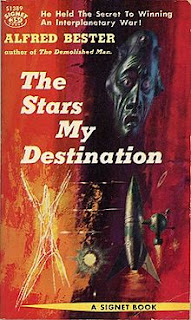 The Stars My Destination – Alfred Bester (1956)

After having heard the name Alfred Bester knocked around in the various science fiction worlds I frequent, I dug up and read Alfred Bester’s The Demolished Man, which was awesome.  Once I find a writer I like, especially in science fiction, I try to dig up anything else from them that I can read.  By using the inter-library loan department at the University of Houston’s M.D. Anderson Library, I picked up the Hugo Award-winning novel, The Stars My Destination.  It is even better than I could have imagined.

The frenetic pace of the plot, the twisted and amoral motivations of the characters, the deep exploration of what, at the time, was purely speculative science, and the morality inherent in the story all stand as predecessors to the dark cyberpunk novels of the late 1970’s and 1980’s.  It is amazing to me that this novel was written in 1956.  The top sci-fi/fantasy writers of the last 40 years all claim it as a primal source, as one of the best science fiction novels ever written.   It is as good as promised and deserves to be read more widely.

The story concerns a man in the 25th century named Gully Foyle, who has been left for dead on a decrepit spaceship drifting through our Solar System.  He survives for 6 months, until he sees a ship named VORGA, which sees his calls for help but does not stop to rescue him.  His desire for vengeance against the VORGA, its crew, and the people who made the decision to not respond to his mayday overshadows everything else in his life.  I do not want to describe too much because at every turn this book upends my expectations and proceeds to gain momentum, depth, and wonderment.  It explores so much, from the strata of such a futuristic society to the machinations of the powerful against the powerless, to the possibilities, both good and bad, inherent in the human colonization of the Solar System.  I do not want to ruin any of that for a future reader of The Stars My Destination.

Alfred Bester was a visionary genius right up there with the likes of Isaac Asimov, Arthur C. Clarke, and Jules Verne when it came to extrapolating the possibilities scientific progress can bring.  He was also a genius in the vein of Philip K. Dick, and William Gibson, able to show the human need to use technology and to own it, oftentimes to our very own detriment.  I hope more people read Bester’s work, and keep it alive for future generations.  Stories like these are what made me love the genre of science fiction.  They keep me hopeful that originality and beauty and intelligence can be found in old writing as well as in new writing.  This is an awesome thing indeed.

(This awesome book is available for download as a PDF file here: http://americandigest.org/Bester,%20Alfred%20-%20The%20Stars%20My%20Destination.pdf )

(This book is also available for purchase here:  AMAZON  )
Posted by Rob Instigator