Grant Morrison ran out of steam before finishing the Invisibles 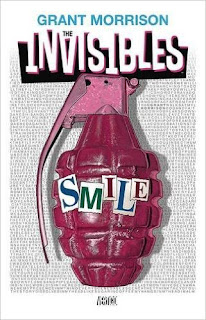 The Invisibles Omnibus collects all the issues released of the Invisibles series which ran from 1994 to 2000.  Compiling comic books like this can be an issue as many are created to be open-ended, allowing the story to continue with new writers and artists indefinitely.  In the early 90’s a wave of comic book writers started to break away from the corporate comic book structure, in which anything created is the sole property and responsibility of the parent company.  They wanted to control, to “own” the content they were creating, without having to resort to the comparatively limited publishing and distribution capabilities of small presses and underground publishers.  This allowed some of the industry’s top people to set up deals with the big publishers, where they would hold the rights to the material and essentially have free rein as to what stories they wished to craft, and where the stories would lead to and ultimately end.  Neil Gaiman took this and ran with it in the Sandman series.  Alan Moore did so as well with a sequence of amazing titles.  One of their contemporaries was Grant Morrison, the British writer that penned the entire run of the Invisibles for the Vertigo imprint.

Both Moore and Morrison are fringe thinkers, interested in the esoteric, occult, and mysterious in the world we exist in.  Both draw from the mass of occult literature and their own personal studies into the weird to write their stories.  Whereas Alan Moore’s work has a serious, intellectual feel to it, as if you are being told a preposterous story by the world’s wisest man, Grant Morrison’s work is like spending a month with a LSD-addled speed-freak who wants to share everything they have heard/seen/read/experienced regarding the Occult and esoteric, and whose narrative cannot be fully trusted due to the disjointed, haphazard nature of his mind.  It is an odd difference, and one which has divided the two writers.

The Invisibles is an exciting book, for the most part.  It is an interesting tale, for the most part.  It is clever and witty, for the most part.  Perhaps it would have benefitted me to read just one issue’s worth of it every month like comic book fans have to do.  Since I do not have that luxury of time, I had to read it over the course of a month.  The story, like so many others, builds and builds as we meet new characters, explore their lives, both past, present, and future, and discover countless conspiracies, secrets and horrors, until it comes at you like an onrushing tsunami, unstoppable and violent.  It really does “fry your brain” at times with the vast amount of freaky conspiracy and magic, all with double and triple meanings and outcomes. This tempo and intensity are not sustainable in a work of literature of this length.  The book drags heavily around the ¾ mark, and the ending is nowhere near as inspired as the earlier parts of the book.  Perhaps, having aged many years since he began the work, Grant Morrison’s anarchic sensibility was tempered by time and wisdom.  Who knows?  All I can say is that for all the wild information contained within, I do not see how anyone who was not already deeply familiar with the weirdness presented in this book would enjoy the story, which is the standard “secret society exists to fight another secret society, both of which are mortal enemies of each other, or ARE THEY?”  Boring.

The Invisibles is one of those works where the creator decided to throw everything including the kitchen sink at the page and see what sticks.  While I was entertained mostly, and informed very slightly (I already knew about nearly every aspect of weird that Morrison details in this book), I was left with an empty feeling.  There is no real substance behind this book.  I do not think it will hold up well as the years go by.  It in fact becomes a tedious read toward the latter parts.  Part of this is due to the inability of Morrison to craft an ending as satisfactory and weird as his beginning and middle, and part of it is due to the lack of cohesive focus in the way the story is presented.

The very best work is crafted by either an individual or by equal partners who see things through from beginning to end.  The Invisibles did not use the same artist for the run of the comic.  In fact, many issues have 4-6 different illustrators drawing the story, which to me distracts from the tale being told.  Art and the decisions made in the process of making Art require purpose, actual purpose.  Neil Gaiman’s Sandman epic did not use the same artist for every tale, but it did use the same artist for all the cover art, and the same artist for each complete “chapter” of the stories.  This adds a cohesion that is absent in the Invisibles.  The book suffers from this greatly.  Comic books are the ultimate combination of Art and Words.  The very best of the genre is created by dedicated teams.  The Dark Knight Returns was a masterpiece, and it was only helped by the fact that the same writer (Frank Miller), artists (Frank Miller, Klaus Jansen), and colorist (Lynn Varley) handled every panel of every page of every issue.  Alan Moore’s The Watchmen also benefitted greatly from the partnership of Alan Moore and Dave Gibbons.  Having the artist and the writer share in the design, layout, and creation of any comic greatly improves it.

While there are many cool things in this comic, it never captured me, and I never felt any affinity to any of the characters involved.   Much of it seemed overly complex, and disjointed, for no discernible reason.  Every two pages the story flips from one sub-plot to another, creating a very shitty reading rhythm. It’s like Grant Morrison tried to create magic through a comic book and did so purely by regurgitating every single occult and conspiratorial idea he had ever run into, but without the humor and intelligence of The Illuminatus Trilogy for example, or the deep exploration of history found in Alan Moore’s From Hell, a far more disturbing and beautiful book.  Oh well.  Live and learn.  On to the next book.

(This book can be purchased here:  The Invisibles Omnibus  )
Posted by Rob Instigator