I want to eat ALL of these mushrooms 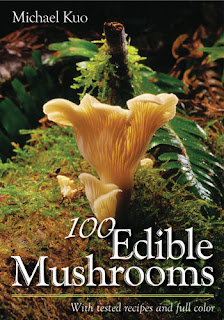 I have spent my whole life fascinated by the world of Fungi.  Whether it was seeing them pop up “magically” overnight on a fresh cut lawn, or reading about their life cycle, I was always intrigued.  I love to eat the mushrooms that fungi create.  I love to take photos of any mushrooms I run across in my day-to-day life.  Lately, I have been on a kick to read as much about these amazing living organisms and their place in the fabric of nature and life on Earth.
Mushrooms are delicious.  They should be, as they are the fruiting bodies of the fungi, created solely to spread billions of spores in an effort to have a few of them germinate and grow into their own mature fungus.  The actual fungus usually lives hidden away, whether just under the soil, or under layers of bark.  This is where you will find the mycelium, which is like a ragged net of fibrous tentacles, somewhat like a chaotic root system.  This mycelium is what grows and processes the food that the fungi live on.  Some fungal mycelial mats are so huge they cover acres and acres of territory.  In fact, a fungus is the largest living organism we have yet to discover.  There is one in the northwest woods that covers so much acreage it is mind-boggling.
Out of all the mushroom species we know and have scientifically described, few are good to eat for humans and even fewer are delicious.  There are an estimated 16,000 species of fungi in North America alone, of which only around 3,000 or so have been documented by science.  This makes it a very interesting field for someone like me, who loves science and scientific inquiry.  It allows the dedicated amateur to make great contributions to a developing science.  It also makes for fun hunting when searching for mushrooms for the dining table!
Mushroom identification is a very painstaking endeavor, and should be learned preferably at the hand of a mycological expert, or at least someone who has years of experience collecting edible mushrooms.  This is not possible for all, and that is why books such as this are a great resource.  Too many mushroom guides either concentrate on the hard science behind the fungi, leaving interested amateurs scratching their heads, or they want to be as encyclopedic as possible, making it difficult to find information quickly.  Michael Kuo’s book does a great job of focusing solely on 100 edible mushrooms.  Out of these 100 though, only around 20 are considered choice to eat, best cooked simply and their flavor and aroma enjoyed that way, while many are bland but edible, suitable more for addition to soups and stews.  Either way they are highly nutritious and fun as hell to find.
In the past two years of my mushroom explorations, I have come across a patch of amazing Chanterelle mushrooms only once, and in my backyard of all places!  As stated in this book, they were a bright orange color, had false gill ridges underneath, had white flesh when cut that did not discolor, and smelled of a fruity apricot.  I cleaned them and sautéed them in butter and some salt and chives, and my wife and I feasted on them atop some scrambled eggs.  It blew my mind, and tasted better than any store bought mushroom I had ever tasted.  Hopefully the Houston area has a mild winter this year which would allow for the woods to our northeast to be rife with cool mushrooms as the rainy season continues.  Mushroom identification and collecting is a great hobby and I hope to make some cool mycological discoveries!