The Spirit Molecule and the Possibilities of DMT 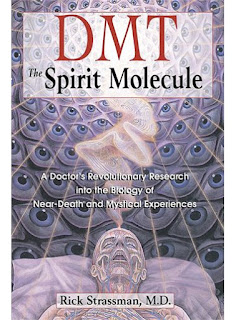 DMT: The Spirit Molecule – A Doctor’s Revolutionary Research into the Biology of Near-Death and Mystical Experiences – Rick Strassman, M.D. (2001)

There are a few fields of human scientific exploration where the amount we know is far outweighed by the vastness of what we do not know.  The study of consciousness, of how or why a nervous system and a collection of neurons embedded in fat tissues results in what we experience as self-consciousness, or awareness, has been explored for ages by theologians, mystics, and recently by scientists.  It is a very difficult field of study since we are using the same mechanism we are studying to make sense of what we are studying. How can the brain analyze itself, if our reality is but a construct of that same brain?  How do people experience consciousness outside of their bodies, whether through trauma, near-death-experiences, mystical states, or psychotropic chemicals?  These are huge questions, and we are just beginning to truly delve into them.

One of the many ways that humans have expanded their innate consciousness and connected with what they felt was the eternal divinity, has been through the ingestion of intoxicants.  Many different things have been used, from herbs, to alcohol, to hallucinogenic plants and animals.  For many humans throughout history, this was the way they connected with the spirits, with the powers that they felt created and controlled the world around us.  Scientists have a hard time studying these experiences, as they are usually very subjective, and one person’s inner truths and revelations may not make much sense to another.  It is hard to get any definitive data.

Dr. Rick Strassman, through his research into the compounds created by our brain to regulate body functions (serotonin and melatonin for example), was drawn to what is still a mystery in our brains. This mystery is the pineal gland.  In many species, what is our pineal gland is a third eye of sorts, capable of detecting light and dark and situated above and between the two regular eyes of primitive creatures like snakes and lizard and turtles.  In humans however, this gland is located in between the two halves of our brain.  It is not part of the brain per se.  It grows from the roof of our mouths, our palettes, and rises up into the brain sometime after the first month of conception.  What drew Dr. Strassman to the pineal gland was a synchronicity he experienced while researching the pineal gland.  He read that, around the 49th day after conception, the pineal gland secretes a large amount of Dimethyltriptamine, or DMT, a very simple molecule that has profound effects on our brains and consciousness.  DMT is naturally occurring in much of the plant and animal life on Earth.  At the same time, Dr. Strassman was engaged in a long personal exploration of Buddhism, and he read that the Buddhists believe that the 49th day after conception is when the soul enters the fetus, reincarnating into its next form.  Knowing of the effects that DMT can have on the brain, this coincidence sparked a desire to understand in Dr. Strassman.

There are a lot of situations where the pineal gland secretes vast amounts of DMT directly into the brain.  These are usually trauma events, such as when a woman gives childbirth, in a baby when the baby is actually born, and also when we are about to die.  People who have taken DMT as a drug experience something that is so fast-acting, so otherworldly, so rife with a deeper consciousness than they ever knew existed, that it begged the question of why our body floods our brain with such a chemical during high levels of stress and trauma.  Dr. Strassman wondered if the chemical DMT could not be referred to as the “spirit” molecule, for it seems to be the compound that allows our consciousness to either connect or travel to, an elevated level of existence.

Dr. Strassman details his efforts in getting this study to take place, the hardships that took years to grind through, and the experiences he had with his test subjects.  Some of the chapters cover the clinical aspect of the experiments.  Others deal with the variety of experiences that the test subjects related to Dr. Strassman upon the completion of their DMT doses.  Some subjects felt they were pulled to a higher state of reality.  Others, many others, felt they were being guarded/watched/taught by entities they encountered after taking the DMT dose.  Many described it as being aware of the oneness of consciousness, of the infinity of consciousness, of the futility of fearing death, for they saw how consciousness just transitioned from the physical to the metaphysical easily.  Many no longer feared death because of their experiences with DMT.

Dr. Strassman tried to see how beneficial or therapeutic these sessions could be, but as with all things, it was more dependent on the mindset of the test subject and the setting they were in when they took the DMT. Some people were ready to explore such a vast experience.  Others shied away from it and feared for the loss of their “self.”  As with any powerful experience, what we get out of it is dependent upon what we bring to it.  He was unable to continue his studies on DMT, partly because of these set and setting issues, and partly because of the increasing pressure from the government to curtail all research into mind-altering chemicals, even the ones which showed promise as therapeutic drugs in psychiatry. What is evident is that more research needs to be done, and that there is likelihood that DMT could be the way our body creates a connection to the eternal/divine.  It is worth exploring more, as it seems to correlate with what much of the world’s mystics and shamans and saints have been trying to tell all of us.  Humanity is not separate from nature.  Our individual consciousness is but a small part, a shadow of the eternal consciousness of the multi-verse.  Most of the DMT test subjects experienced the deepest and most profound sense that the connecting tissue of existence is love, pure and simple.  Love.  Love is all you need.  It may be all there really is.

(This book can be downloaded and read in PDF format here:
http://www.organiclab.narod.ru/books/DMT-The-spirit-molecule.pdf )
Posted by Rob Instigator