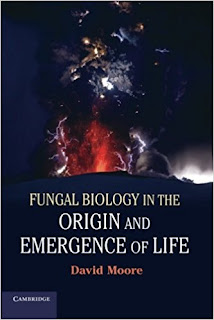 One of my life’s passions is that I love mushrooms.  Actually, I love fungi of all types.  I seek them out after spring rains.  I keep my eye on the ground as I walk around the campus where I work.  I also keep careful notes in my head about what mushrooms are delicious and safe to eat.  I photograph almost every mushroom, slime mold, or lichen I find.  The variability is amazing, and many of them are outright beautiful to look at, but I think part of the thrill is that mushrooms are unpredictable.  They do not grow in orderly ways like plants do.  Finding a patch of delicious chanterelle mushrooms is great, but it is no guarantee that they will be there again next week, or month, or even at the same time next year.  Mushrooms are ephemeral in their way.  It is amazing to think that these overlooked organisms may very well have been the very first self-contained life to evolve in our world.  This story is the subject of Fungal Biology, by David Moore.

Moore is a biologist, having recently retired from working on genetics and mycology.  If any human has the ability to understand the many threads that point to fungi as the initial role-player in the web of life it is Mr. Moore.  His explanations are sensible, even to someone with a limited background in mathematical or genetic knowledge.  The first part of this book details the properties of modern-day fungi, and how their cellular features differentiate fungal life from vegetable life or animal life.  This background is very important to understanding the rest of this book.  I learned quite a great deal just from the first chapter alone.

In following chapters, David Moore explores the scientific consensus regarding the state of the Earth in the early days.  As he describes it, a habitat must have been created before the processes began which lead to multi-cellular life.  This habitat was a very different place than the green and blue orb we all live on currently.  Not only were there no plants or animals on Earth about 3.7 billion years ago, there were no cells of any type, or even oxygen in the air!  Only with the arrival of single-celled, photosynthetic proto-algae did our world’s atmosphere begin to be oxygenated.  In fact, most of this early oxygen “fixed” itself to the massive quantities of Iron atoms dissolved in the primordial oceans, raining down a silt of iron oxide molecules that created the world-wide layers of iron ore we have been mining for the past 1000+ years.  It was not until the flourishing of single celled plants in the oceans that the atmospheric oxygen actually rose to the super high levels that allowed the massive proliferation of land-plants, and the animals that lived on those plants.  This took well over 2.5 billion years to occur, a magnificently ridiculous expanse of time.  (For comparison, Dinosaurs lived around 100 million years ago, and the genus Homo has been running around the Earth for maybe 600,000 years.  Our whole current civilization is barely older than 10,000 years, a trifle in comparison)

Before plants and animals came to dominate the Earth it was fungi that ruled.  They ruled for over 2 billion years!  They did not spring wholesale out of the ground though.  David Moore describes through several chapters what he sees as the mechanism by which life arose.  Many scientists have claimed that the first cellular life that we would recognize as such arose in inhospitable places, such as underwater thermal vents, deep caves, or volcanic fissures.  We find very hardy microorganisms in these habitats now, and call them Archaea, but these creatures are actually quite late-comers compared to other fungi, bacteria, and algae.  Moore posits that much of the chemicals for life existed in the vast aerosols that covered much of our atmosphere.  Aerosols are just particles so small that they stay aloft as they are buffeted by the molecules of the atmospheric gases. Each of these tiny aerosol droplets was a laboratory, mixing up pre-living enzymes, amino acids, lipid molecules, etc.  It only takes one of these billions to manage putting together a self-replicating molecule.  These aerosols and organic molecules would have ended up dispersing this material all over the Earth, resulting in a landscape we would never recognize, of rocks and gravels covered in a thin bio-film.  It is the materials in this worldwide bio-film that served as the food source for our OG organism, allowing it to grow, replicate, compete, and evolve.  I can only summarize what is covered in much more proper detail in this book.

By the time plants arose, so many fungi existed that today 90% of all plant life has some sort of relationship with it.  Many plants are in symbiosis with fungi.  The fungus provides rare minerals to the plant through the connection of roots and mycelium fibers (hyphae), and the plant provides the fungi with simple sugars that it needs to grow.  Some fungi are predators of plants, and work more like parasites.  Still other examples see plants that parasite the fungus, where the plants receive the benefit but provide none for the fungus involved.  As far as animals are concerned, almost no herbivore animals exist that do not have a colony or colonies of primitive fungi/bacteria living in their digestive tract.  The very first herbivores ate tons of fungi unknowingly, and in many cases this became a deep symbiosis.  Without the fungus in a cow’s gut, the cow would not be able to extract nutrition from the cellulose that makes up most of what it eats.  All plant and animal life owe their existence to fungi.

To this day the kingdom of fungi is overlooked.  Humans place undue value on animals, for we are animals.  We value plants, because so many of them are needed for our survival.  I think we should start to praise and love fungi as well.  We are here because they were here.  They broke the inhospitable Earth for us plants and animals.  Without them nothing in our vast web of life would exist, and our world would be just one giant layer of biofilms, exuding tar and other waste products.  I cannot begin to describe the amount of information provided here by David Moore, but I am very glad I ran across this cool and seminal work.  I hope it brings mycology to the forefront and helps shape the conversation for decades to come.  Now to go outside and look for some more mushrooms!

(This book can be purchased here: FUNGAL BIOLOGY IN THE ORIGIN AND EMERGENCE OF LIFE  )
Posted by Rob Instigator