My first dive into Russian literature pays off 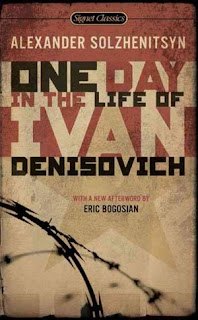 One Day In The Life of Ivan Denisovich – Alexander Solzhenitsyn (1962)

The name Alexander Solzhenitsyn was known to me.  His place among the great writers of Russian literature was something I was taught as a matter of fact.  I knew very little else than that  when I picked up this, the author’s first published work, a novella that details the happenings of an entire day, from waking to sleep, of a man imprisoned in a Soviet-era prison camp.  It was only after finishing this oddly humorous book that I looked up Solzhenitsyn’s life, and learned that, like Ivan Denisovitch, he too spent some years of his life in a Soviet prison camp.  This came after he had served with honor in the Soviet military, rising to the rank of Captain.  His crime?  It was much like all the other stupid and tyrannical “crimes” used by despots to crush their people.  He was claimed to have made seditious statements against Stalin after his private letters were intercepted and read by the Soviet government.  After he was released from the prison camps, he turned to writing and this novella was the only one of his works to be published in his native Russia.  It is a sad shame that the writing that helped him win a Nobel Prize in literature had to be published surreptitiously in the West, and smuggled back into Russia.  Down with tyrants and despots everywhere!  Burn them all down.

In this book I found a man who had become so accustomed to his life, and it was barely life, inside the prison camps that his every single thought, from waking to sleep, was concerned with his immediate concerns and needs, with no thought given to escape or freedom, and very little thought given to the state of the world outside the prison camp’s fences.  The tone of the novel reminded me of a Russian Vonnegut, the otherwise ordinary characters matter-of-factly resigned to the stupidities and irrationality inherent in the world they inhabit, finding cold comfort in gallows humor, and seeking every single opportunity to stretch the rules, gain a tiny advantage, or finding ten minutes somewhere to try and keep warm.  Nearly every second is spent by Ivan either plotting on how to make his current situation slightly better, or in watchful fear of doing the wrong thing, saying the wrong thing, or even looking at the wrong person for fear of retribution from the camp guards.

As Ivan tells it, there are very few moments of true rest for the prisoners.  One of them is the first moments of wakefulness after the morning alarm has been rung.  Ivan stated that, in these fleeting minutes, still in bed, eyes still closed, and his body somewhat warm, he was “free.”  There were no obligations for these few minutes, and he tries to make them last as long as possible.  One of the other times he stated he felt free and that his time was his own, and not the state’s, was the ten minutes he was allotted to eat his servings in the mess hall during breakfast and dinner.  The hour before meals was hectic, with lines, pressing, queues, counts and recounts of prisoners, all in an attempt to feed them in an orderly fashion.  That hour of stress was relieved by the ten minutes of quiet, slow eating.  The instant he was done however, the manic thoughts and worries return. Sad but true.

As Ivan goes through his day, Solzhenitsyn has his narrator describe the nearly-fractal levels of bureaucratic bullshit that permeated every aspect of life in these Russian prison camps.  One small example is the numbers assigned to the inmates, and painted on their hats and shirts, making it easy for the guards to single them out individually from a distance.  There were several older trustys that were permitted to paint and touch up these white numbers on a black field, for a price, and theirs was a tricky art.  They had to make sure the numbers were legible, for illegible numbers would constitute a violation and ten days in the “cage.”  However, the prisoners requested that the numbers be slightly blurred, just enough that guards further than a few meters way would have trouble reading it.  It was a delicate balance, like everything in the prison camp.  This level of insanity suffused everything in the camps.

Solzhenitsyn does an amazing thing with this novella.  As I read it and progressed through Ivan Denisovich’s day, I became filled with a dread.  Throughout the day Ivan had managed to save himself from bad situations, plan for the day ahead, manage to finagle two bread rations, get a little tobacco, find a piece of broken hacksaw blade, and lead a work crew building masonry.  I waited for the hammer to fall.  I expected tragedy to spring forth and engulf our narrator, for everything seemed to be going as well as it could for him.  This was not to be.  Solzhenitsyn is not after that.  Instead, he shows us a “good” day, but a day not unlike the hundreds that Ivan had before, and the hundreds that were yet to come.  In this way, it really hit me how BIG this novella was.  We humans can conform to nearly every horror, and assume it as our new normal.  We can go to work and see our fellow citizens be killed and mistreated, and we see it as the normal day to day life we lead.  This nightmare, this waking delusion, is what lies at the heart of all tyranny.  In showing us a non-tragic, normal, ordinary day in the life of a normal, ordinary man, Solzhenitsyn shines a harsh light on the true tragedy involved, that hundreds of thousands of normal, ordinary people were tasked with imprisoning and torturing millions of normal, ordinary people, all at the request of a distant, rich, and aloof government.  It is a great book.
(This book can be purchased here:  ONE DAY IN THE LIFE OF IVAN DENISOVICH )

(When Solzhenitsyn won the Nobel Prize for Literature in 1970, he was afraid to leave the USSR and go to Stockholm for fear of not being allowed to return.  He sent in a written acceptance speech, which is amazing and well-worth reading.  The speech is found here: https://www.nobelprize.org/nobel_prizes/literature/laureates/1970/solzhenitsyn-lecture.html )
Posted by Rob Instigator